Today is my forty-seventh birthday.  And I am at work.  I don't mind being here though.  You can look at things many different ways.  The difference between ordeal and adventure is attitude.  So for today, I am hanging out with friends in a building with sick people in it and we are not allowed to leave until 7 pm.  Sounds fun, eh?

Had my last chemo dose on October 6th.  I'm just going to let that sit and soak in it's own paragraph.

Last week was a busy one for tests.  I had my cancer clearance CT on Monday the 19th.  Thankfully they found no cancer.  So theoretically, I am a cancer survivor.  Cancer survivorship they call it.   For now.  Talk to me in five years.  If still no cancer, then I'll start breathing a little easier.
Then four days later I had my sigmoidoscopy which checks the connections they made in my rectum back in April, that and they removed more scar tissue.  I requested to be knocked out for that this time.  Never again will I do that without drugs.  They doped me up good too.  Retrograde amnesia is a wonderful thing.  Hard time remembering what they said or did before and after the surgery.  Now that is the way to go.  Thankfully Jen was there to hear what they said. Evidently, the connections are good so on to the next test which was on the 26th.  Barium enema...
What can I say about this test.  No fun.  Painful.  Messy.  Oh the mess I made.  Why the pain you might ask?  Enemas aren't bad, right?  When your colon hasn't been used lately and then you fill it up with fluid, spasming can and did occur.  That hurt like hell.  Then the tube kept coming out and they had to put it in again and again and again.  Finally they taped it in place.  I got barium everywhere.  Nothing was spared.  Not even my socks.  Just plain old awful.
The enema study showed I have narrowing of my colon just before what is now my new rectum, which is really just colon that is stretched and sewn together to approximate my old cancerous one.  No leaking though.  My colo-rectal surgeon says it is concerning but recommends that I go through with getting reconnected.  Using the colon might stretch that area out and if not, I get yet another colonoscopy type of thing and they will manually stretch it out.  Jesus it sounds like I'm writing gay porn here.  Christ I hate this cancer and what it has done to my body.  I mean I was never a work of art but damn.
The past week or so has been rough.  Mentally and physically.  After the enema, I was done.  I couldn't bear one more test, not one more study, nothing.  Tired of fighting this fight.  Treating this type of cancer is so Goddamn invasive.  I'm just tired of being poked and prodded.  Everything is sore.  I had to expel well over 1 liter of barium out of my ass and it wasn't used to that.  Constantly going to the bathroom and once there, only 5 ml would come out.  Over and over again for 3 days I did this.  I am not use to have any pressure down there so the littlest amount sets off the alarm and off I run to the bathroom.  I highly recommend using those wipes with aloe.
I've been asked how does it feel to be done and cancer free.  Not sure how to answer that really.  Am I cancer free?  Currently, yes...I hope.  I do have to keep looking over my shoulder for the next 5 years (or more) and getting checked.  Par for the course.  There is a bit of me, the real pessimistic bastard part of me, that thinks the worst will happen.  But who can tell?  No one.  All of us are one colonoscopy or CT scan away from having someone tell you, "Sorry but you have cancer..."  I'm here to say that life doesn't end when you get told that.  Sure felt like that at the time though.  Dark days back in December and January.  Can't tell you how many nights the minutes turned to hours as I struggled with what might be.

December 2nd is my surgical date for getting rid of my colostomy.  First surgery I have ever looked forward to having.  Of course I am concerned about my colon not operating correctly, me being incontinent of stool (pretty good chance of this especially as I age), and host of other things.  Once again this is pretty serious abdominal surgery and while I trust my surgeon, shit can and does happen.  All I can do is be healthy in mind and body for this next step in my personal war on cancer.  Onward, then, and fear not...

After my last chemo dose, I took my daughter to Camp Orkila on Orcas Island in the San Juans here in Washington State.  Ben and I have done this trip a couple of times before and now it is Sam's turn.  Twelve other dads and their daughters caught the Friday ferry and met up at the camp.  There we were joined by one hundred other dads and their daughters or sons from various schools across the region.  The forecast was for rain and cold.  We actually got mild weather with very little rain.  I called the YMCA (they own the camp) and requested a cabin with heat since my side effects were really kicking my butt.  They came through with a great cabin with our own bathroom and a central area with a huge fireplace.  The cabins here are normally very rustic.  By rustic, I mean no doors, no heat, no lights, and a good long walk to use the bathroom.  Score one for having cancer! 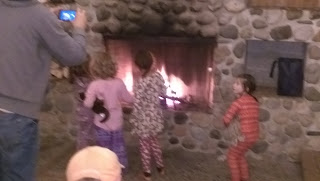 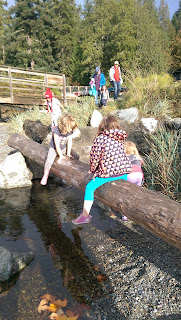 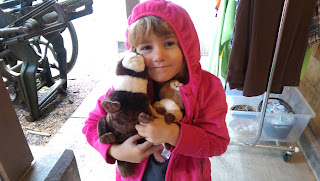 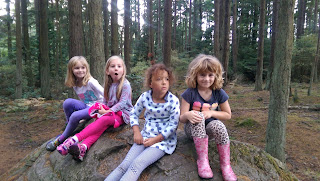 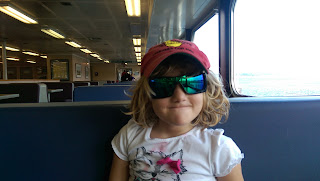 Since June I have been going to downtown Seattle every Tuesday for chemo.  Now that chemo is done my Tuesdays have been spent sailing with my good buddy David!!!  Every Tuesday so far has been beautiful.  Good wind with no waves and most importantly...sunshine! 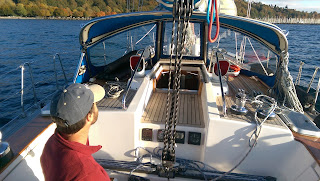 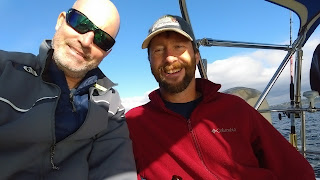 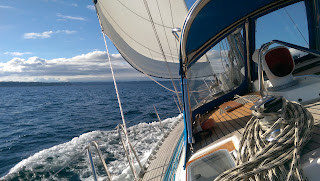 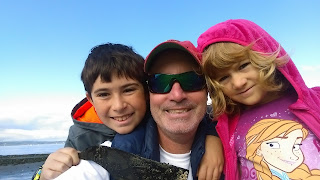 Ben and I did another car hunting expedition early in September.  This time we drove a Camaro SS and then a Dodge Charger.  Loved the Charger.  Thought the Camaro was absolute crap.  Camaro had automatic trans and just an awful interior.  It was so uninspiring that we forgot to take pictures of it.  Ben did get to ride in the front seat though.  The Charger though...that car I would love to have.  Feels big and goes like hell.  Comfy also.  Ben loved this car the most maybe even more than the Mustang.  I think it was the color.  Electric blue.  The Dodge dealer didn't even haggle.  Wanted full sticker.  $49,000.  Before taxes!!!
We didn't scare the salespeople too much as the famed Seattle traffic conspired against us to set any speed records but we still had fun.  Up next is the Ford Focus RS.
The Focus RS is going to be awesome.  Huge power, 4 wheel drive, drift mode, etc.  Comes out next year.  Early next year.  We are signed up to test drive it already. 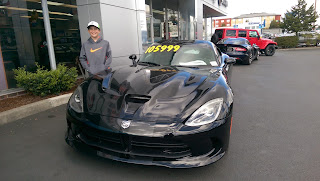 Truth be told I would never buy an other new car.  At least not right now.  Too much money and I don't see the value.  But Ben and I have fun trying out different cars.

Last weekend I took Appa out with my parents and the kids to the Seattle Yacht Club outstation on Bainbridge Island for the 13th annual Halloween party there.  What a great time!  38 boats showed up with well over 150 people.  Mostly kids.  It was like an infestation!
I made a cheeseburger casserole for the potluck that was quite awesome.  Afterwards the kids dressed up and we did the haunted house.  Sam went through twice.  Ben once.  Then we strolled to the dock and trick&treated among the boats docked there.  Really fun.  Once again I have hardly any photos of Ben.  Grrrr.  His costume was a make up on the fly type of thing.  His real costume was still being made by his super cool uncle Randy.

Now I have one whole month to rest and get ready for surgery.  I'm jogging again and changing my eating habits.  I was so hungry on the chemo.  I think it was the steroids they were giving me.  My weight is 181 currently and I'm looking for 175 or so.  Maybe they can do a little liposuction while they have me split open.

I can't begin to express my gratitude for the love and warmth that I've received from family and friends.  Even the RNs and MDs taking care of me at Swedish were great.  It's been a long, strange trip but I think I'm better for it.  I'm a bit more on an even heel.  I also try to listen and not just wait my turn to talk.  And finally patience.  I really try to be more patient.  It is hard for me but I think I'm getting better at it.

“Even a happy life cannot be without a measure of darkness, and the word happy would lose its meaning if it were not balanced by sadness. It is far better take things as they come along with patience and equanimity.” ~  Carl Jung